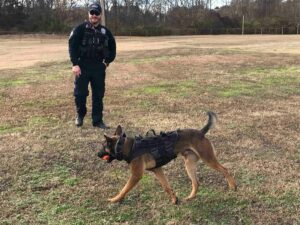 The Gastonia Police Department has purchased a new K-9 and selected a new handler for an opening in its K-9 Unit. K-9 Max, a 1½-year-old German Shepherd-Belgian Malinois mix from Ventosa Kennel in Scotland Neck, NC, and new handler, Officer Ryan Huneycutt, have joined the unit.

“We certify our dogs through the United States Police Canine Association (USPCA), which is based out of St. Louis, Missouri,” said Sgt. Thomas Doby who serves as GPD’s K-9 Unit coordinator. “Max has gone through a 12 to 14 week school while being trained by our Training Officer Jason Eaker. He is trained in narcotics, criminal apprehension, tracking, building searches, article searches, and obedience.”

There are six dogs in GPD’s K-9 Unit: four German Shepherds, one Malinois, and now with the addition of Max, one mix of Malinois and German Shepherd. Both breeds are widely used in law enforcement across the country due to their versatility.

“We picked a Malinois-German Shepherd mix this time simply because he was the best dog available,” Sgt. Doby said. “We look between Malinois and Shepherds, and we try to get the best dog we can get. Officer Eaker and I look at the dog and the handler and see what’s going to be the best match and best dog for that handler.

“I expect a lot of great things out of them,” Sgt. Doby said. “Ryan has a lot of drive and Max is turning out to be a very solid dog that’s going to have a good temperament and be able to do his job as well. He has a lot of drive, a lot of work ethic, and I think they’re going to do very well.”

Law enforcement and emergency officials spoke about efforts in the search for missing 6-year-old Maddox Ritch and how people can help during a press conference Sunday. Maddox was last seen Saturday at Rankin Lake Park […]