The City of Gastonia’s Solid Waste Division hauled away a record 750 tons of excess trash during the popular Free Excess Household Trash Week that started March 22. That’s 66% more than was collected during the free week in March 2020 and 34% more than the free week last September. It took City crews nearly two weeks to collect the record amount of bulky trash, and that included working on a Saturday. 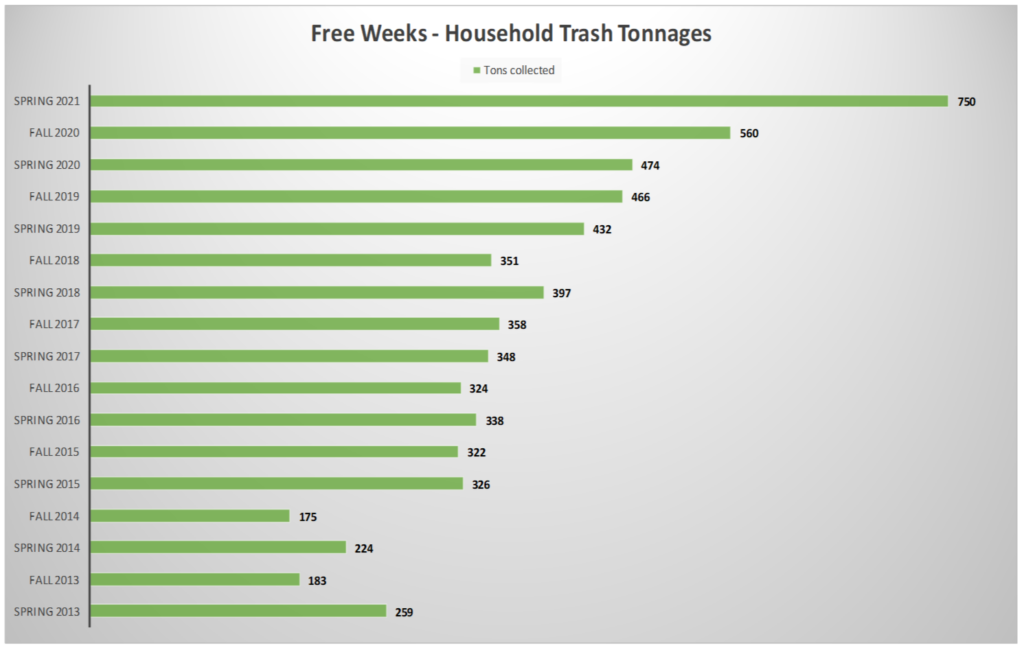 While the free service is a plus for residents, Solid Waste crews assigned to Excess Trash collection were not able to collect yard waste during the last two weeks of March. The City is now behind in collecting yard waste carts and loose yard waste. “We apologize for the delays and we are asking residents to be patient as we work diligently to get caught up and back on our regular yard waste schedule,” said Public Works Director Dale Denton.

Residents were able to leave large or bulky household trash at curbside for one week without being charged and to be picked up during their regular trash collection. During the City’s Free Excess Trash Weeks, the most popular items left at the curb are discarded furniture and mattresses. And Solid Waste crews also see a few unusual items left for the landfill such as pianos, grills, lawnmowers and outdoor playsets.

“This is such a popular service that residents actually call our office early to find out the dates when it will be held,” said DeeDee Gillis, Manager of the City’s Solid Waste Division. “We’re proud to offer this service to help our residents and our environment.” Gillis said that with more people being at home during the pandemic, residents found the opportunity to take advantage of the service and get rid of large and bulky items.

Year-round, City Solid Waste crews do not collect or dispose of:

Residents must take those items to the Gaston County Landfill for proper disposal.

The City offers Free Household Trash Week twice each year, typically near the first day of spring and first day of autumn. While free to customers, there is a price tag. Last September’s free week resulted in 560 tons of excess trash and cost the City an extra $28,700 in employee overtime and extra landfill fees.

Because of forecasted sub-freezing temperatures tonight, which are expected to refreeze slush and ice on secondary roads, City officials are delaying the opening of administrative offices, postponing Monday’s solid waste collection and canceling transit services. […]

Curbside recycling ends for City of Gastonia customers on October 26 because it is no longer cost-effective to provide the service due to the extreme levels of contamination entering the City’s recycling stream. Customers can […]

The City of Gastonia has reorganized and realigned some of its largest departments, and three departments have gotten new names. City Manager Michael Peoples says similar services are now grouped together and the alignment will […]