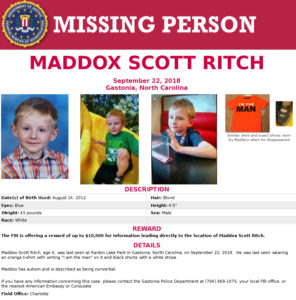 Maddox’s father spoke to the press at a news conference today with law enforcement and fire officials.

Ian Ritch pleaded for the public to help find his little boy urging anyone who saw him to call the police tip line, “I just want my son home.” Ian Ritch thanked everyone for their efforts to find Maddox and described the pain he’s feeling, “it’s torture.”

Maddox’s mother, father and the friend who visit the parked with Ian Ritch are fully cooperating with the investigation.

The intensive search will continue tonight for 6-year-old Maddox Ritch. Severe weather may impact efforts; the plan will be adjusted if the safety of searchers and law enforcement members is in jeopardy.

Rankin Lake Park remains closed and volunteer searches are not requested at this time. The community’s desire to help search is appreciated, but valuable evidence could be destroyed by untrained people which could jeopardize the mission to #FindMaddox and bring him home safely. No one wants that to happen.

The FBI’s dive team is on scene with different equipment than what has been used in previous searches of Rankin Lake. Every available tool is being employed to thoroughly search the lake. It is still being drained which will soon make it impossible to put large boats in the water.

Another 67 law enforcement investigators, agents, analysts, and other personnel were added to the search today for Maddox. There are now 330 people helping to investigate this case. That doesn’t count the hundreds of people devoted to the searches. Investigators are following nearly 250 leads.

“You’ve seen the enormous amount of resources that we are devoting to locate this precious little boy,” Gastonia Police Chief Robert Helton said. “But we are missing a very important piece of our investigation. There are people who were at the park on Saturday and for whatever reason haven’t called us.

“There’s a sign out sheet to rent boats at the park,” Helton said. “We’ve obtained those lists and sadly not one single person who rented a boat that day has reached out to us. Now we have to waste precious time to track them all down. Please, call us if you were at the park Saturday.

“We have located some of the possible witnesses we wanted to find, but we still need to find the male jogger in the area and today we have a new witness we hope to speak to,” Helton said. “A young white man was using the boat ramp. He had backed his truck in and appeared to be loading up his silver kayak. The truck is described as a large, newer model, 4-door white, pick-up truck. It had over-sized tires and running boards on the side. The man was talking on the phone and had on a camouflage baseball hat. He may be a valuable witness and we need him to call us.”

With fast moving Hurricane Michael expected to make landfall along the Florida Panhandle today, the City of Gastonia wants to remind citizens of the telephone numbers to call for various types of emergencies: For a […]