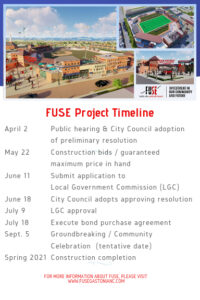 A number of important dates are coming up in Gastonia’s Franklin Urban Sports and Entertainment (FUSE) project. FUSE is an economic development effort to bring a multi-purpose stadium to Gastonia’s downtown area by spring 2021. The FUSE facility is designed to be the centerpiece of multiple private development projects that will surround the facility and bring millions in additional investment to the area.

Peoples said Rodgers Builders, the project’s construction manager-at-risk, has already established a prequalification list for sub-contractors and bids should be submitted soon. “We have several local companies qualified so that’s positive for the construction company.”

He said Rodgers will also be submitting the guaranteed maximum price for the project sometime in late May. “Then we’ll be going with that number to the Local Government Commission. July 9 is when that meeting will be held in Raleigh to approve borrowing those funds.”

The LGC, staffed by the Department of State Treasurer, reviews and approves the issuance of debt for all units of local government and assists those units with fiscal management. In reviewing each proposed borrowing, the LGC examines whether the amount being borrowed is adequate and reasonable for the projects and is an amount the unit can reasonably afford to repay, according to the nctreasurer.com website.

“So after the July 9 meeting, the City can issue the debt and the contracts can be executed sometime in July,” Peoples said. “So early September we could be under construction with an opening date in spring 2021.”

Other FUSE related items include:

November 4, 2020 News from other Sources

September 2, 2020 News from other Sources