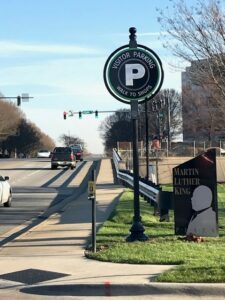 “We’ve had a lot of feedback from downtown business owners and they’re excited about getting them,” said Jason Thompson, the City’s planning director.

The 12 downtown parking signs are the first produced in Gastonia’s wayfinding program. Wayfinding signs inform people of the surroundings and show information at strategic points to guide them in the right direction. The City has been working with Bizzell Design of Mooresville to bring 77 signs to downtown and other parts of the city.

“They’re going to make an impact visually,” Thompson said. “In addition to putting out these new decorative signs to point people to various places in the community, we are also reviewing existing  signs and removing ones that duplicate the new wayfinding signs. So there’s a decluttering benefit as well.”

The City’s wayfinding program has been in planning and development stages for months. After downtown parking signs are installed, a second phase of the project is installation of downtown wayfinding signs. A third phase will be installation of signs along boulevards or major thoroughfares throughout the city. The thoroughfare signs will be about 5 feet by 8 feet and are expected to be installed this summer. 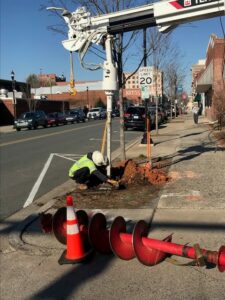 “The rule of thumb in any good wayfinding program is to send people to public parks, public facilities like city hall, the conference center, the Schiele Museum, Crowders Mountain,” Thompson said, “and destinations like hospitals and also schools, mainly because of stadiums and large gymnasiums. A lot of people go to high school football games or other events.”

After the first three phases in the wayfinding program are completed, another phase could look at doing trailhead and additional signage for parks.

“It would be nice to bring attention to the expanding greenway network,” Thompson said. “The trail system has street linkages all over the place. The whole idea is reminding people when you’re using these linkages, you’re still in this network.”

One part of that network is the Highland Rail Trail that leads to a widened sidewalk and the walkway that goes over the bridge along Martin Luther King Jr. Way. There are bike lanes and markings and pedestrian upgrades along Second Avenue that lead to Chestnut Street where you connect with Lineberger Park and the greenway there.

“The last phase of wayfinding is to work with DOT to get Gastonia-branded signage on interstate signs,” Thompson said. “We would add the city logo at the top of the sign and would probably try to do this in conjunction with I-85 widening in coming years.”

December 5, 2018 News from other Sources