“This is both a historic and proud day for our department and our City,” said Police Chief Travis Brittain. “These men and women represent the best of the best in our law enforcement community and we know they will continue to serve, protect, and unite our communities.”

“On behalf of the members of City Council, I congratulate these very competent and deserving officers for their dedication to our community and their profession,” said Mayor Walker E. Reid, III. “We support them and the entire Gastonia Police Department for all they do.” 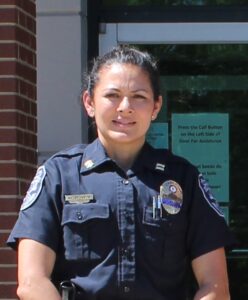 Brogdon joined the GPD in 2005, was promoted to sergeant in 2013 and captain in 2020. She has served in a number of positions including patrol officer, community coordinator, grant manager and coordinator of the Gaston County Gang Initiative, and as a detective specializing in financial and electronic crimes. Since being promoted to sergeant in 2013 she has served as a patrol sergeant, a community coordinator sergeant, a Criminal Investigations Division sergeant, and as assistant commander of GPD’s Crisis Negotiations Team. She oversees the department’s Traffic and Canine Units, LeadsOnline, Victim/Witness and U-VISA programs, and serves as commander of the GPD Tactical/Mobile Field Force Team.  Brogdon is also a recent graduate of the Charlotte Mecklenburg Police Command College.

She has served as president of the GPD Sergeant’s Association and in 2019 she was recognized with an Exceptional Duty Award for the Association’s support of the Pink Patch Project. Other past awards include recognition for her work with the Mexican Consulate, GPD’s recruiting efforts, the Gang of One Gaston Program, the West Gastonia Kids Camp Program, and for her role in Gastonia’s first human trafficking case in 2017.

Brogdon received a bachelor’s degree in criminal justice from the University of Illinois and a master’s degree in business administration from Pfeiffer University. She also received North Carolina’s Advanced Law Enforcement Certificate. Brogdon is bilingual with fluency in Spanish and English. 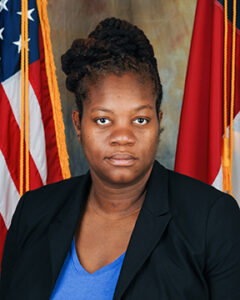 Adrienne Walker becomes the first African American female to be promoted to Captain in the Gastonia Police Department’s history.

Walker joined the GPD in 2009 and was promoted to sergeant in 2014. She has served in a number of positions including patrol officer, youth detective, patrol sergeant, police training officer sergeant and Criminal Investigations Division youth sergeant. She also serves as co-commander of the GPD Tactical/Mobile Field Force Team.

She is a volunteer coach for the community and organizes Friday Night Lights and the annual Unity in the Community 3-on-3 basketball tournaments. She is a member of the Child Fatality Prevention Team of Gaston County, Human Trafficking Multidisciplinary Team, and a board member for Alliance for Children and Youth/Communities in Schools.

Walker was recognized as Officer of the Year from the North Carolina State Law Enforcement Officers Association and has received multiple commendations from the Gastonia Police Department. She received a bachelor’s degree in criminal justice and biology from Barton College, and a master’s degree of public administration from Appalachian State University. She also received North Carolina’s Advanced Law Enforcement Certificate. 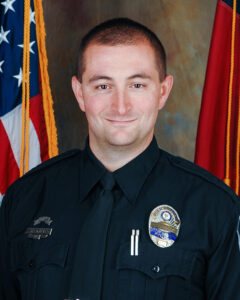 David Rowland has been promoted to Sergeant. Rowland joined the GPD in 2009 and has served in a number of positions including patrol officer, canine handler, police training officer and shift tactical officer.

He is a member of the Chief’s Advisory Board and uniform committee.

Assistant Chief Anthony Travis Brittain has been named Chief of Police for the Gastonia Police Department (GPD). He has served the Department for 25 years, the last six of those in executive management. Brittain will […]

While enjoying the holiday season, please be mindful of common sense crime prevention measures to help keep you and your home safe. Here are some tips from Gastonia Police: Cars Avoid driving alone or at […]