When Chuck Dellinger enrolled in college, his top two choices for a major were forestry and recreation. One of his eighth grade teachers was not impressed with either option and told Dellinger he should be a history teacher instead. That teacher was disappointed when Dellinger chose a career in recreation. “’See-saws and sliding boards,’” Dellinger recalls the teacher telling him. “’You can do so much more with your life.’”

Dellinger will retire March 31 after spending his entire adult life, 38 years and 51 weeks, working for Gastonia Parks and Recreation. And he says he has loved the job he chose.

Dellinger was 15 when he got a taste of working for a parks department. His summer job as a teenager 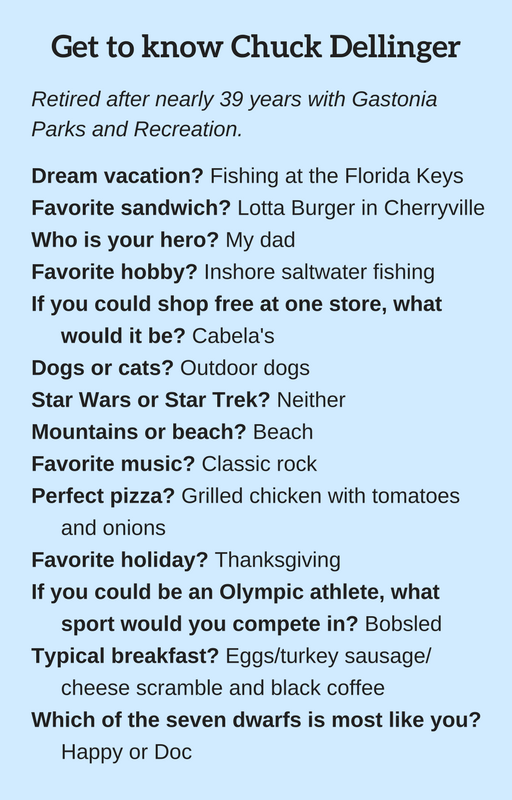 was cutting grass for the City of Cherryville with a push mower, maintaining ball fields, wielding a weed eater, cleaning out horseshoe pits and umpiring youth baseball games.

Dellinger says working in parks reminded him of two things he loved: helping his grandparents on their farm and playing Little League Baseball. “I liked combining the farm aspect of it with the sports aspect of it,” Dellinger says of his high school job with Cherryville Parks. “It just seemed like a good fit for me.”

After graduating from Western Carolina University with a degree in recreation and leisure studies, Dellinger started with the Gastonia Parks and Recreation Department on April 7, 1979. His first job was athletics and special facilities supervisor, helped only by two high school kids. In 2003, he became the department’s assistant director, and he was promoted to director in 2005.

During his first couple of decades on the job, parks were a bit of an afterthought for most people. Dellinger says that changed in the 1990s when the phrase “quality of life” became popular. “Recreation had never had a seat at the table,” Dellinger says. “And suddenly people and industries were saying they wanted communities with good schools, hospitals, good roads and parks facilities.”

He says society’s shift in priorities, putting recreation among a community’s top attractions, is the biggest change he’s seen during his career. And it paved the way for the professional accomplishments he is most proud of.

One is the creation of Martha Rivers Park, completed in 1999. “It blew me out of the water, how good it is,” he says. Teams from all over the East Coast and as far away as Texas come to Gastonia to play baseball and soccer in Martha Rivers Park. Because it brings in tourists, the park helps boosts the local economy. 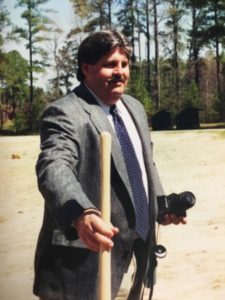 Another accomplishment is the development of Rankin Lake Park, which for 20 years was not much more than a picnic table near a fenced-in lake. Dellinger envisioned it being a popular place to fish, kayak and enjoy nature. For about 14 years, he hung on to some renderings created by a landscape architect. He waited to propose the idea until he thought the time was right. When Rankin Lake Park  opened as a landmark attraction in 2012, Dellinger says it looked almost identical to those drawings from years before.

Ongoing renovations to Lineberger Park are another point of pride. Dellinger oversaw those projects, as well as the fundraising for and design of a number of smaller parks throughout the City.

But Dellinger’s fondest memories are relationships, not ribbon cuttings. He treasures the people he has come into contact with: decades of interacting with up to four generations of families, from City employees to the people and athletes who enjoy using the City’s parks, ball fields, greenways and community centers. “I have been blessed to have met so many great people,” he says.

As he cleaned out his office in the building on Second Avenue where he’s worked for nearly 40 years, he found dozens of cards and faded newspaper articles: handwritten notes from the parents of special-needs kids. Cards from Boy Scouts who had completed Eagle Scout projects in City parks. News clippings about the first kid to hit a home run at Martha Rivers Park.

And he carries a crisply folded $5 bill in his wallet. For more than a decade, he’s driven a group of people with visual impairments to an annual Lion’s Club event near the beach. Most people in the Adult Rec Center’s group for the visually impaired live on fixed incomes. About 10 years ago, one lady insisted on giving Dellinger a tip because he stopped the small bus at a store so she could buy souvenirs for her grandkids. “For Miss Ruby to give me that $5 bill meant more to me than winning the lottery,” Dellinger says. “I will have that $5 bill in my wallet on the day that I die.”

Under his leadership, Gastonia Parks and Recreation Department has grown to 37 full-time employees and 40 part-time. The City has five major parks, five community centers and a dozen smaller parks, covering nearly 400 acres.

Dellinger took his first step toward retirement in 2012, shifting from full time to part time. The recession was still squeezing local budgets and he chose to save the City money by taking a part-time salary. Even now, Dellinger won’t be completely retired. He will continue working for the City about 10 hours per week as a special projects coordinator, helping with FUSE and master plans for both recreation and greenways.

But he’s looking forward to spending more time with his wife of almost 30 years. They have two grown sons and three grandchildren. His parents, both in their 80s, are still living in Gaston County. Dellinger hopes to do some fishing and enjoy the home he and his wife built on the family farmland near Cherryville.

You may also find Dellinger in a City park, eating lunch in his SUV with the window rolled down. For years, he brought his lunch to work and often ate at a park. He likes observing nature and sometimes hears laughter on the playground. “To me, that’s the most satisfying thing, knowing people are having a good time,” he says.

Those see-saws and sliding boards that seemed insignificant to some people have helped give Chuck Dellinger’s life purpose and meaning for nearly 40 years. And Gastonia residents can enjoy a greater quality of life because of Dellinger’s career choice so many years ago.