As the City of Gastonia begins construction this year on the Franklin Urban Sports and Entertainment project, it seeks to repeat the success of similar developments in more than a half dozen cities in the Carolinas, including four currently under construction. These initiatives, like Gastonia’s FUSE project, combine sports complexes with retail, office and residential development to reinvigorate their center city areas.

High Point, Fayetteville and Kannapolis are currently building these venues. Similar projects have already been completed in Winston-Salem, Greensboro, Durham and Charlotte in North Carolina and Greenville, South Carolina. City Manager Michael Peoples said Gastonia employees have toured some of the stadium districts as part of the FUSE design project. “City staff has been following other community stadium construction projects closely,” Peoples said, “and we are fortunate to learn from their successes in transforming their center city areas into popular and exciting destinations.”

Ground was recently broken in High Point, Fayetteville and Kannapolis on mixed-use, public-private projects featuring a sports/entertainment stadium. It’s called “mixed-use” because each includes places to live, eat, shop, work and enjoy entertainment all in one place. “Public-private” means the investment comes from both local government and private developers. “These projects are proven economic catalysts for private investment in downtown redevelopment areas,” Peoples said. “People are drawn to active spaces with exciting, positive energy.”

In Gastonia, as in the other cities, municipal government facilitated the development, providing the vision and pathway to make the revitalization project possible. “Private developers are not likely to come to a depreciated section of a city and propose innovative new uses for it,” Peoples said. “City officials often initiate reinvestment projects such as this by providing a unified vision, attracting qualified investment partners, leveraging state and federal grants, and creating opportunities for success.”

Kristy Crisp, the City of Gastonia’s director of economic development, noted that while the projects are similar in many ways, each is also different. “Each city’s project is customized for its residents,” Crisp said. “City leaders know their residents, their community’s history, the project’s location and what works best for the people who live and work in their city.” Crisp said that includes keeping the residents’ interests and pocketbooks in mind when drawing up the plans. “FUSE has been right-sized for Gastonia,” she said. “The publicly developed and privately developed aspects of the FUSE district all are precisely tailored to work well for the people of Gastonia and to make this project successful.”

Stadium/field construction is to start in 2019 and is to be completed in 2021.
https://www.fusegastonianc.com/

FUSE is a multi-use stadium surrounded by new or repurposed residential and commercial facilities. The 16-acre project site is being developed with public and private money to create a vibrant, walkable destination and community amenity that is used year round. The FUSE district will connect with Gastonia’s Downtown, the Historic York Chester neighborhood and the redeveloped Loray Mill. 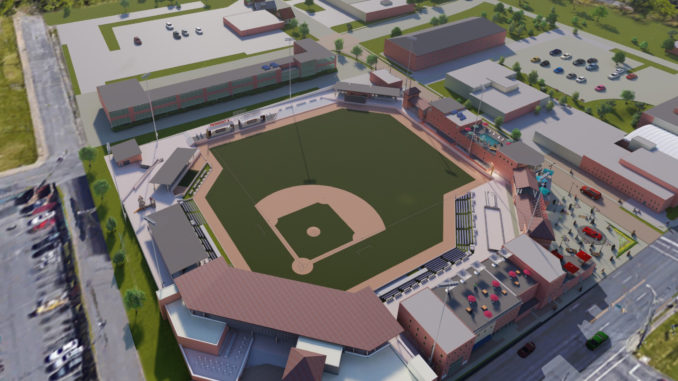 Stadium and other costs paid by City of Gastonia: $21.5 million

Revenue for city-funded portion to come from:

Private development as part of FUSE district might include:

The FUSE project is expected to attract $50-$60 million in private development.

Groundbreaking was in 2018 and is to be completed in 2019.
https://www.highpointnc.gov/2042/Catalyst-Project-Background-Information

This project is intended to bring people, life and vibrancy to the city’s downtown area. The project area is 11.5 acres: 5 acres owned by the city of High Point and 6.5 acres owned and developed by private entities.

Stadium funding to come from:

Surrounding land may be developed in phases as:

Construction started 2017 and is to be completed April 2019.
https://fayettevillenc.gov/government/city-departments/corporate-communications/minor-league-baseball-stadium-study

To welcome their first minor league baseball team, the City of Fayetteville is building a new baseball stadium downtown.

Funding of city’s portion to come from:

Private investment near stadium estimated to be nearly $100 million.

City of Kannapolis – Sports and Entertainment Venue and surrounding development

Construction started in 2018 and is to be completed in 2020.
http://www.kannapolisnc.gov/revitalization

Fifty acres on eight square blocks of new development in Kannapolis’ downtown area is to be anchored by the Sports and Entertainment Venue. The baseball stadium, on the site of the former K-Town Furniture, is expected to attract spinoff private multistory development such as restaurants, retail and residential construction.

Stadium and other costs paid by City of Kannapolis: estimated $51 million

Funding for city’s portion to come from:

November 4, 2020 News from other Sources