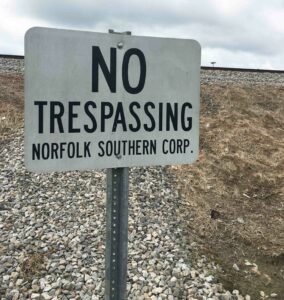 Some Gastonia residents were warned about the dangers of trespassing on railroad tracks during a community safety outreach operation aimed at preventing train injuries and fatalities.

Contact was made with 40 individuals trespassing on railroad property, one person was arrested on outstanding warrants and another was cited for trespassing after ignoring a warning, according to outreach organizers GPD Officer Brian DiYorio and NS Railroad Police Officer Stacey McGraw.

In 2018, North Carolina ranked 9th in the nation for train fatalities. Gastonia has had four fatalities in less than a year and a half.

“Everyone was well receptive of the outreach effort and we even had a gentleman tell us that he was happy to see police officers out educating members of the community on rail safety,” Officer DiYorio said.

Report trespassers to Norfolk Southern Police at 1-800-453-2530. More information can be found online at www.seetracksthinktrain.org and www.oli.org.

The Gastonia Police Department recognized eight officers and four sergeants during a virtual Promotional and Swearing-In Ceremony on Dec. 17. The event was shared through Zoom instead of being held with the traditionally large in-person […]

City of Gastonia Closes City Hall and Other Buildings to Public

This page updated Nov. 10, 2020. The City of Gastonia is continuing its efforts to respond to the spread of coronavirus and to help protect the public and its employees. That action includes complying with […]