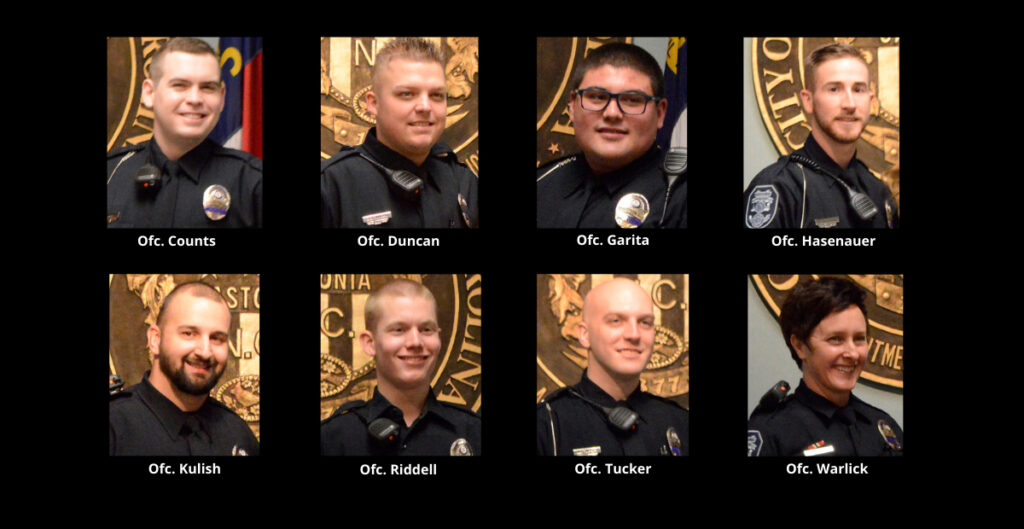 The Gastonia Police Department recognized eight officers and four sergeants during a virtual Promotional and Swearing-In Ceremony on Dec. 17. The event was shared through Zoom instead of being held with the traditionally large in-person crowd of family and friends.

“This ceremony is different than how we’ve done it in the past due to the pandemic, but this is a proud moment for us as we formally recognize our new officers and sergeants,” said Chief Travis Brittain. “We look forward to the great work they will do with our department and our community.”

Sgt. Shane Johnson joined the GPD in 1998 and has served in Patrol, and as a Community Coordinator, a Field Training Officer, Police Training Officer and Shift Tactical Officer. Sgt. Johnson is retired from the NC Air National Guard with 23 years of service. He has an associate degree from Gaston College and NC’s Advanced Law Enforcement Certificate. He was promoted to sergeant on Dec. 3.

Sgt. Joe Bain joined the GPD in 2010 and previously worked with the Belmont Police Department for three years. His service with the GPD includes Patrol and Traffic Enforcement and reconstruction of motor vehicle collisions. He has a bachelor’s degree from Western Carolina University and the NC Advanced Law Enforcement Certificate. He was promoted to sergeant in August.

Sgt. Pate joined the GPD in 2011 and has served with Patrol and as a PTO, Detective, and SWAT and Honor Guard member. Sgt. Pate received a bachelor’s degree from Columbia Southern University. He holds NC’s Advanced Law Enforcement Certificate. He has served in the Air Force and currently serves in the North Carolina Air National Guard.

Zachary Duncan – Hired Jan. 6, Officer Duncan has an associate’s degree from Gaston College.  He also completed the BLET Program at Gaston in June.

Kevin Garita – Hired Feb. 24, Officer Garita came to the GPD with experience from the Lincolnton Police Department and in public safety with CaroMont Regional Medical Center. He is active in the NC National Guard.

Devin Hasenauer – Hired Aug. 24, Officer Hasenauer came to the GPD from Reading (PA) Police Department where he had three years of service.

Joel Kulish – Hired July 6, Officer Kulish came to the GPD from Roanoke Police Department where he served eight years. He also has over 10 years of military police experience, and is active Army Reserve.

Landon Tucker – Hired Dec. 16, 2019, Officer Tucker has a bachelor’s degree from Belmont Abbey and completed the BLET program at Gaston College in June of this year.

Judith “Nikki” Warlick – Hired May 13, 2019, Officer Warlick came to the GPD from the Cleveland County Sheriff’s Office. She served with the sheriff’s office for five years and the Shelby Police Department for five years. She holds an associate degree in Criminal Justice from Gaston College and completed the BLET program at Cleveland Community College.

Gastonia Police celebrated eight promotions, and five recently hired officers were sworn in during a ceremony on April 4 in the police department’s community room. Capt. Edward Turas was promoted to assistant chief effective upon […]

The Law Enforcement Torch Run for SONC is Friday, May 11

The 2018 Law Enforcement Torch Run through Gastonia/Gaston County to benefit Special Olympics North Carolina will be held on Friday, May 11, starting at 9 a.m. in the parking lot of Dixie Village Shopping Center, […]

Capt. Edward Turas has been promoted to Assistant Chief effective upon the retirement of Assistant Chief Mike Smith on Jan. 1, Gastonia Police Chief Robert Helton has announced. “We wish him success in his new […]